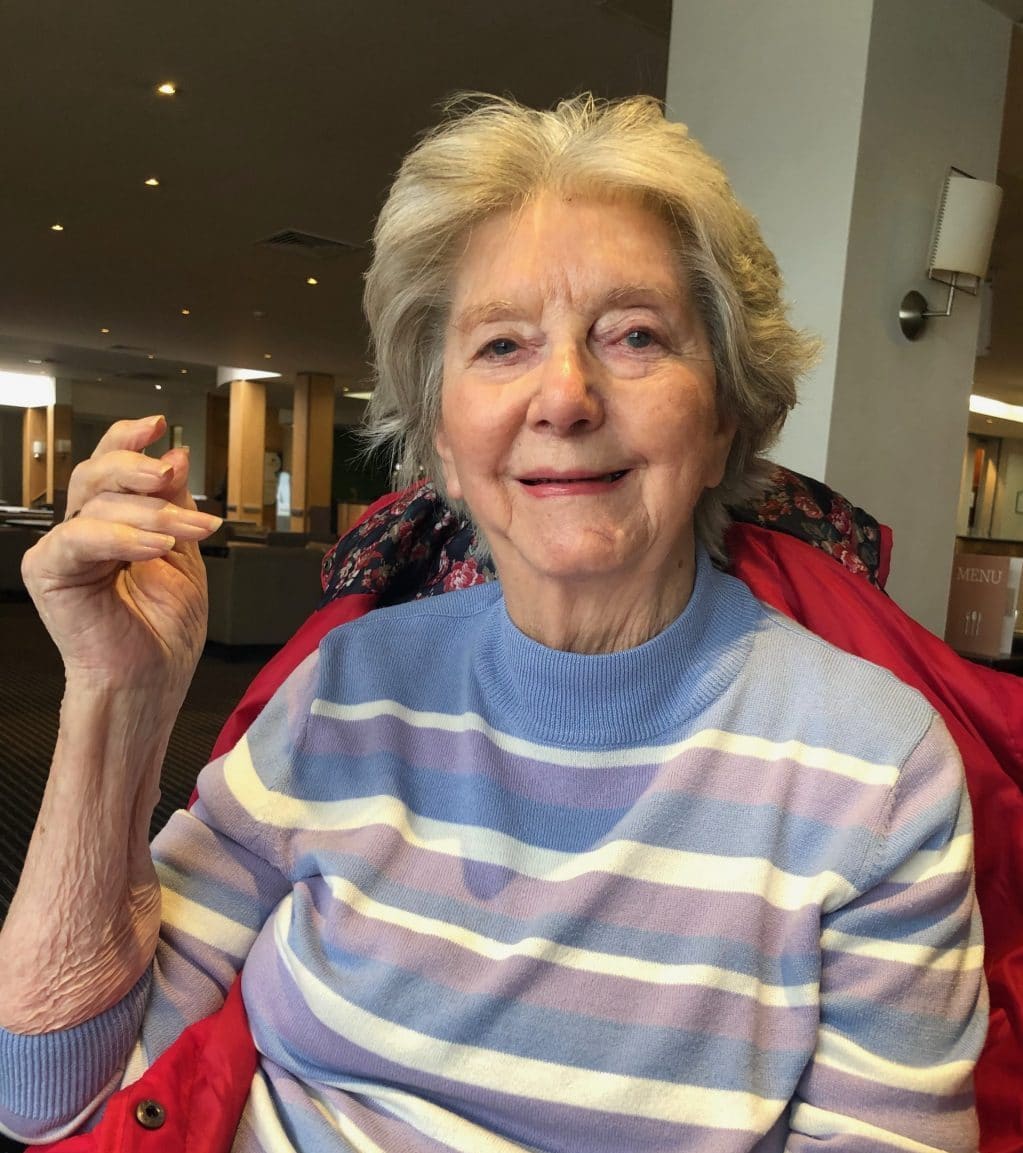 Interview with Beryl Oppenheim (born May 4, 1929), creating her personal memoir…

“In May 1945, I was living at home with my mum at 17 Dale Road, West Monkseaton, Northumberland. I was 16. My father was still serving in the army in Italy and I’d left school at 14 to go to Greggs, the shorthand and typing school in Jesmond, Newcastle. I remember the headteacher making an announcement to tell us that the war was over and then we formed an orderly file and walked to church, to say a pray of thanks.

“I don’t recollect any street parties or anything like that. I do remember I watched the news at the local cinema, The Regal, and there were bonfires. The Australian and New Zealand airforcemen stationed in Whitley Bay lit lots of bonfires on the fields on their base that night.

“It wasn’t a case of rejoicing, but a sense of relief. Relief that we could go back to our normal lives.

“Every night for God knows how long, I had pretty much slept in the air-raid shelter at night, as the German Luftwaffe came, dropping bombs on South Shields, North Shields and Whitley Bay.

“We had an Andersen Shelter in the garden. The Government supplied them and you had to dig it into your garden. My father did ours before he went away with the army. It was delivered before the war started and it arrived in bits that you had to put together. You dug the hole and built the shelter in the hole.

“It was always cold and damp.

“Because my father worked on the fish docks, he wasn’t called up at the beginning of the war, but he was eventually, about the time that the 8th Army was in Egypt and Montgomery started his offensive.

“After joining up, but before he was sent to Egypt, I can distinctly remember arriving home from school with a plate full of doughnuts, that I had made in cookery. My mum smiled as she opened the door and when I looked in, I saw my dad. I was so happy that I dropped the plate and I can remember seeing the doughnuts rolling around on the floor. I hadn’t realised it at the time, but he was on embarkation leave. I never saw him again until after the war.

“I used to write a letter to him every day, even if it was just a few lines – “I love you daddy”, “missing you” or “I hope you come home soon”. Nothing special. He didn’t often get the chance to write back, but every now and then we’d get a letter telling us that he was okay.

“My father ended up following the 8th Army from Egypt into Algiers. They landed at Salerno in Italy and went into Monte Cassino, Naples and up to Rome, eventually.

“I have a photograph of him, taken in Naples, after they had landed in Salerno and Monte Cassino had fallen. He looked very gaunt and had lost a lot of weight. It had been a tough time. When they landed at Salerno, the Germans were waiting for them, I believe, and they lost a lot of men. I think he lost a lot of friends.

“After the liberation of Italy, I remember him saying how kind the Italians were to them and that the women used to cook them nice meals.”

Back in England: “For our nights in the shelter I had a Siren Suit, an all-in-one garment with a zip up the front. You sometimes see photographs of Winston Churchill wearing his. Mine had a hood as well and you’d put it on over the top of your pyjamas. There were pillows kept in the shelter, but you didn’t take your bedding. You didn’t have time to fiddle about.

“Mostly, we would go upstairs to bed and then I’d be woken up by my mum, who would say: ‘you’ve got to get up, the sirens are going’.

“In the shelter, I’d just lie or sit there, listening to the bombs fall. I used to count them and I knew that if I’d get to six, they would have passed over and the bombs wouldn’t drop on me! Thinking about it now, that wasn’t very kind, only caring about myself.

“But you would sit there listening, thinking that the next one would hit you. They made a really loud whistle as they dropped. Maybe it was so loud because the planes were so low. I don’t know. Lots of houses around us were damaged, but our road wasn’t hit.

“Sometimes the siren would go off and I’d be in the cinema and we’d all just carry on watching – my mum would go mad at me! The film would switch off and a sign used to come up, saying ‘The air-raid siren has now sounded, people who wish to leave the cinema, please leave now’. Then the lights would come on and just a few people would leave. Probably those with children at home. But most people stayed and just waited for the film to restart. We only lived five minutes’ walk away.

“People just accepted it. It was life and you just got on with it. It wasn’t until I was older and had left school that I think I began taking notice of what was happening more. I suppose it’s how you protected yourself, as a child. You can’t think about all the bad things that are happening.”

After VE Day, it was another year or two until Beryl’s father, Jack Harpham, returned from Italy. Beryl left Greggs and got a job with NCR, the cash-register firm, in Newcastle as an ‘accounting machine demonstrator’. She got to travel all over the UK, demonstrating how to use the accounting machine, which was basically a sophisticated adding-machine, that also brought an end to hand-written bookkeeping.

She remembers being sent to London for 2-3 weeks, aged 16, to stay at an hotel off Oxford Street for training.

“The three or four hotels opposite mine were full of American soldiers, all waiting for a ship to take them home. They used to whistle and shout, so you couldn’t go near the window. But they were only wanting to be friendly!

“In fact, I went to the cinema with a couple of them. I remember walking across Hyde Park. People were different then. They had more respect for one another.

“I enjoyed being in London. But can you imagine it now, sending a young girl down to London to stay on her own? But no one thought anything of it then.”

It was at the Newcastle NCR office that Beryl Harpham, as she was then, met her husband-to-be, John Oppenheim. It was 1947, after he’d been demobbed from the Royal Navy, where he had served throughout the war in the Fleet Air Arm, receiving the Distinguished Service Medal for his part in the first night bombing of a U-Boat.

They married in April 1949 and while still working with NCR, John’s job took the family from Newcastle to Hull, to Manchester and Liverpool, before London and a home life in Maidenhead, Berkshire in 1965, where Beryl still lives today, aged 91. 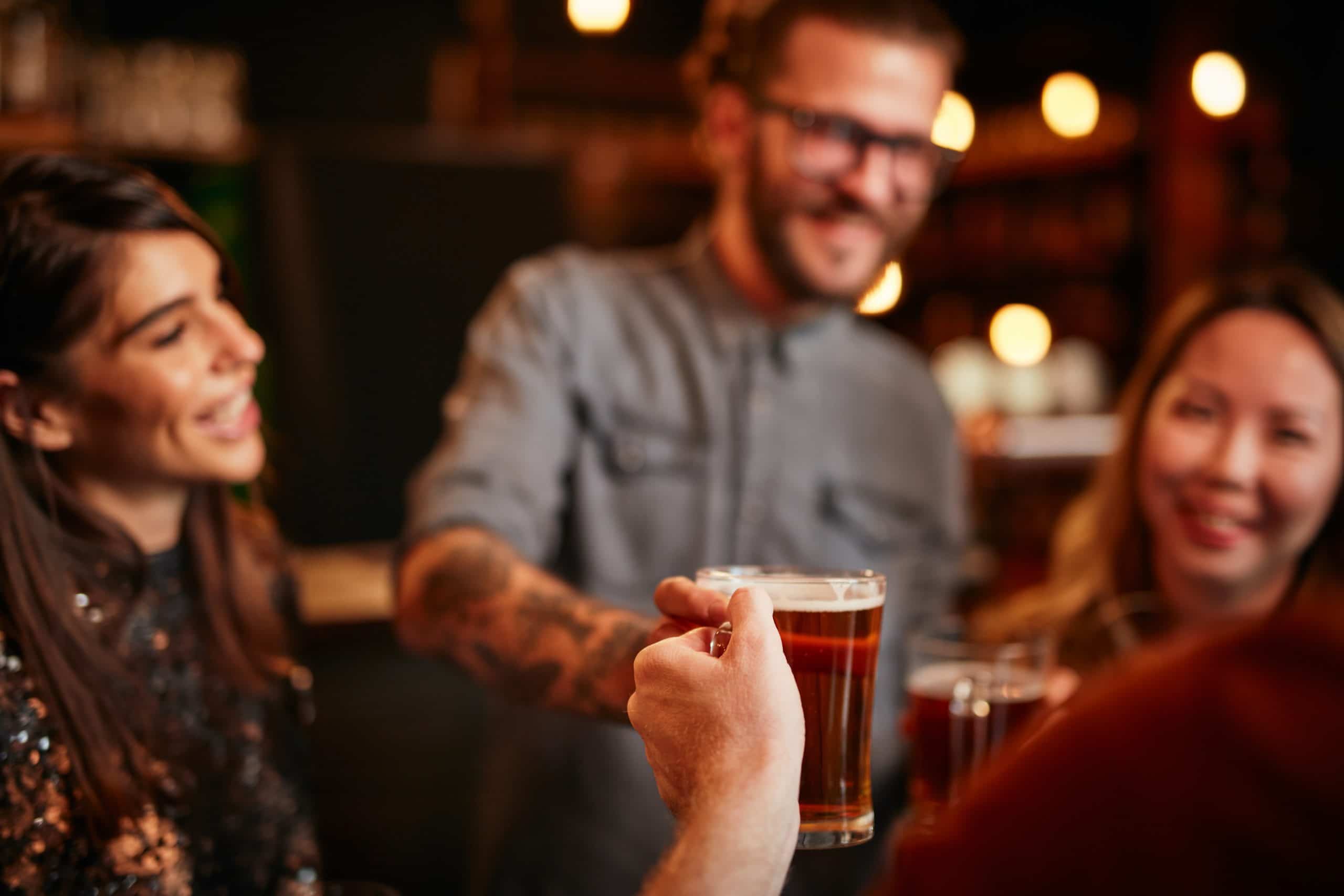 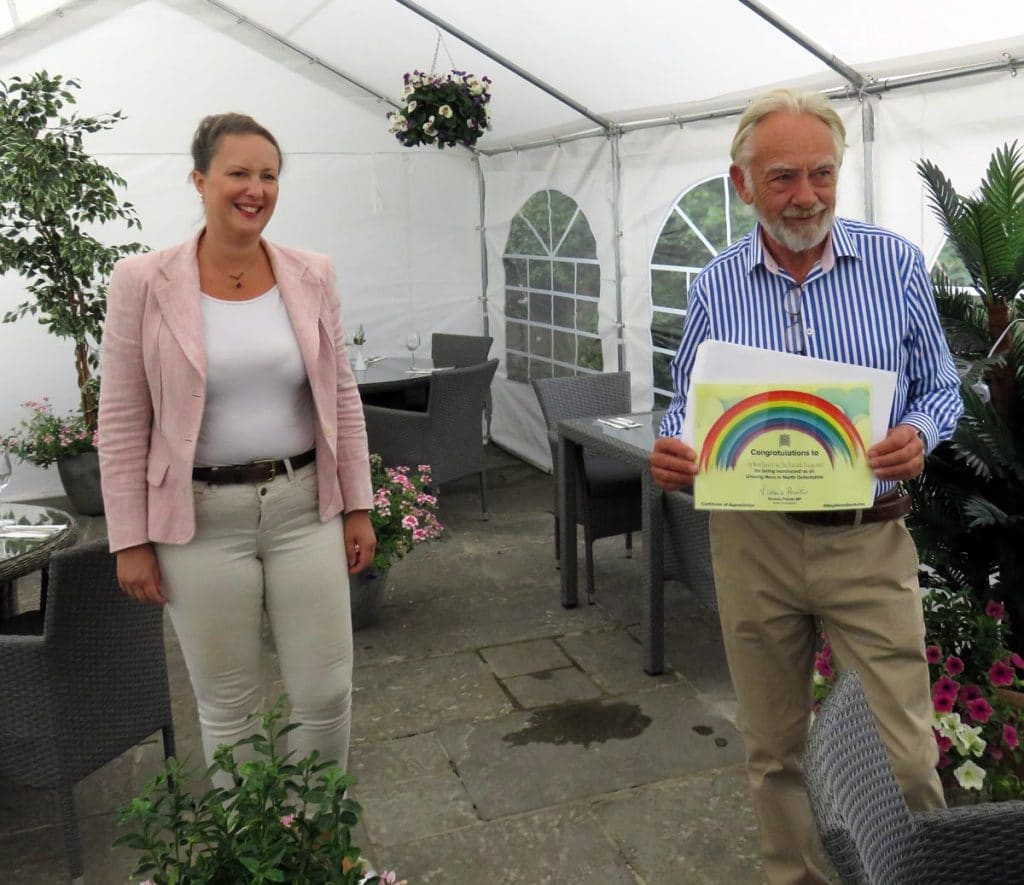 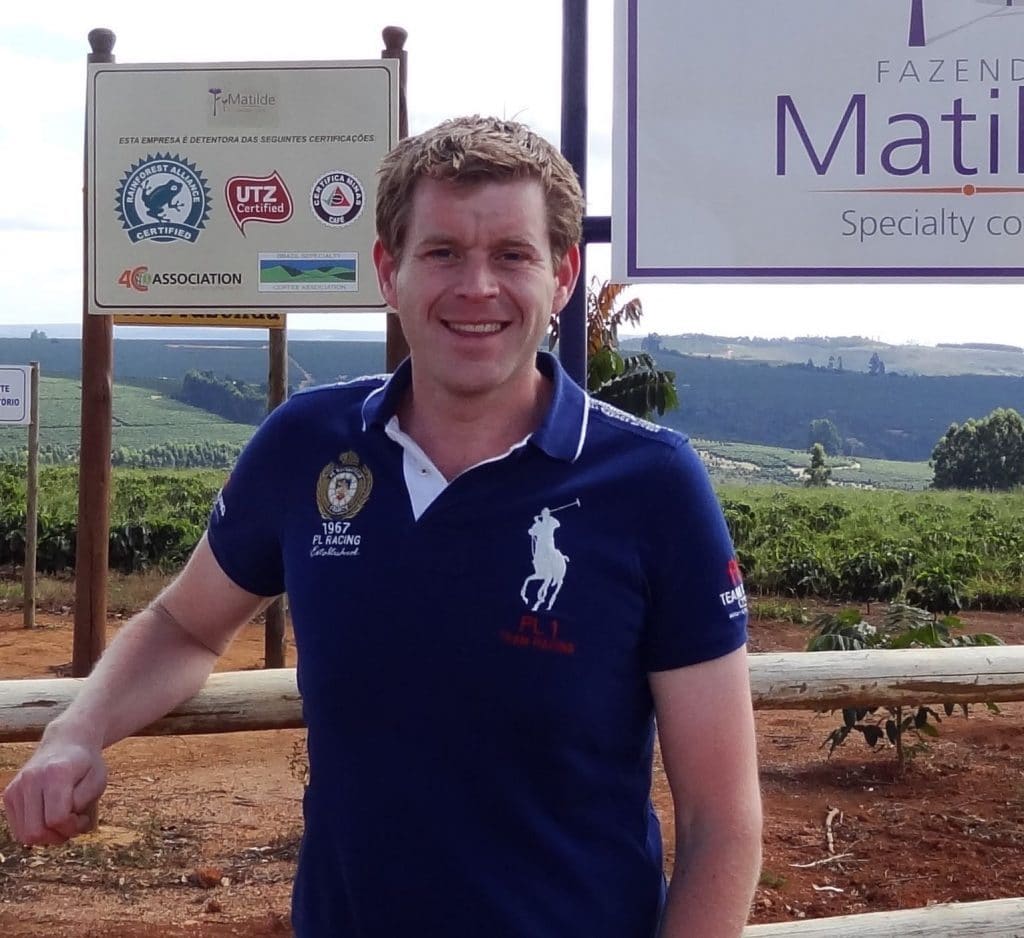 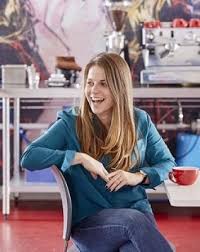 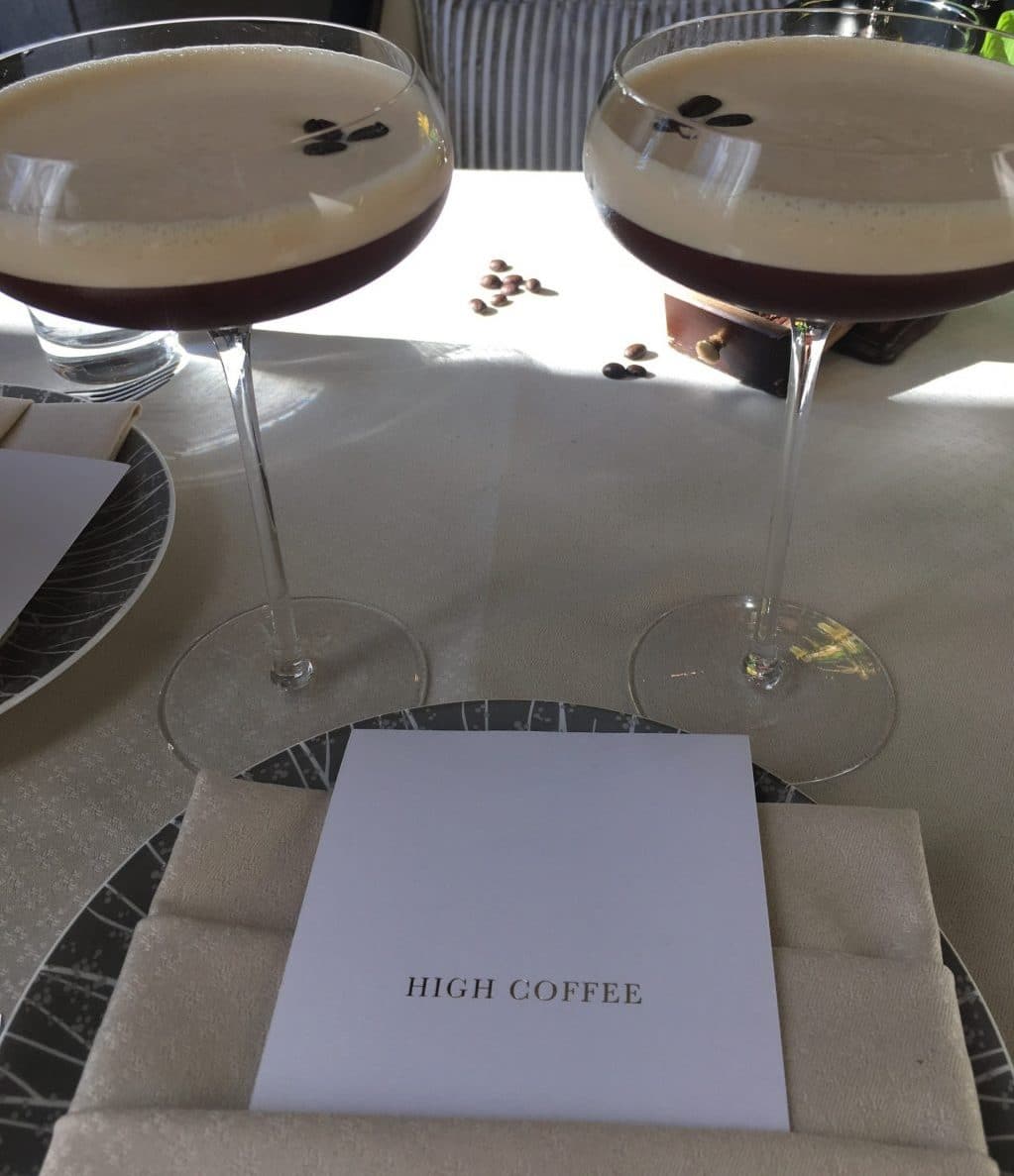 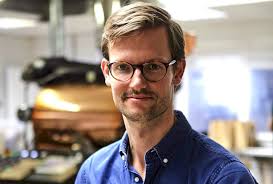